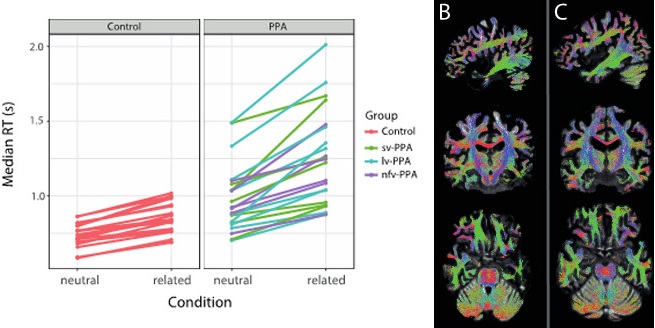 Primary progressive aphasia (PPA) is a clinical neurodegenerative syndrome with word finding problems as a core clinical symptom. Many aspects of word finding have been clarified in psycholinguistics using picture naming and a picture-word interference (PWI) paradigm, which emulates naming under contextual noise. However, little is known about how word finding depends on white-matter tract integrity, in particular, the atrophy of tracts located ventrally to the Sylvian fissure. To elucidate this question, we examined word finding in individuals with PPA and healthy controls employing PWI, tractography, and computer simulations using the WEAVER++ model of word finding. Twenty-three individuals with PPA and twenty healthy controls named pictures in two noise conditions. Mixed-effects modelling was performed on naming accuracy and reaction time (RT) and fixel-based tractography analyses were conducted to assess the relation between ventral white-matter integrity and naming performance. Naming RTs were longer for individuals with PPA compared to controls and, critically, individuals with PPA showed a larger noise effect compared to controls. Moreover, this difference in noise effect was differentially related to tract integrity. Whereas the noise effect did not depend much on tract integrity in controls, a lower tract integrity was related to a smaller noise effect in individuals with PPA. Computer simulations supported an explanation of this paradoxical finding in terms of reduced propagation of noise when tract integrity is low. By using multimodal analyses, our study indicates the significance of the ventral pathway for naming and the importance of RT measurement in the clinical assessment of PPA.