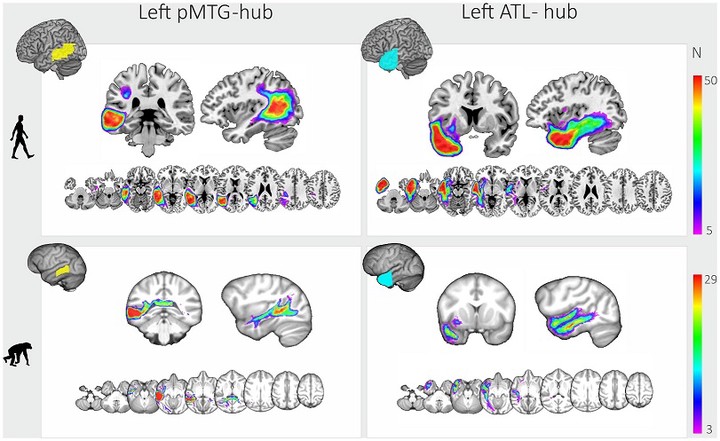 The biological foundation for the language-ready brain in the human lineage remains a debated subject. In humans, the arcuate fasciculus (AF) white matter and the posterior portions of the middle temporal gyrus are crucial for language. Compared with other primates, the human AF has been shown to dramatically extend into the posterior temporal lobe, which forms the basis of a number of models of the structural connectivity basis of language. Recent advances in both language research and comparative neuroimaging invite a reassessment of the anatomical differences in language streams between humans and our closest relatives. Here, we show that posterior temporal connectivity via the AF in humans compared with chimpanzees is expanded in terms of its connectivity not just to the ventral frontal cortex but also to the parietal cortex. At the same time, posterior temporal regions connect more strongly to the ventral white matter in chimpanzees as opposed to humans. This pattern is present in both brain hemispheres. Additionally, we show that the anterior temporal lobe harbors a combination of connections present in both species through the inferior fronto-occipital fascicle and human-unique expansions through the uncinate and middle and inferior longitudinal fascicles. These findings elucidate structural changes that are unique to humans and may underlie the anatomical foundations for full-fledged language capacity.