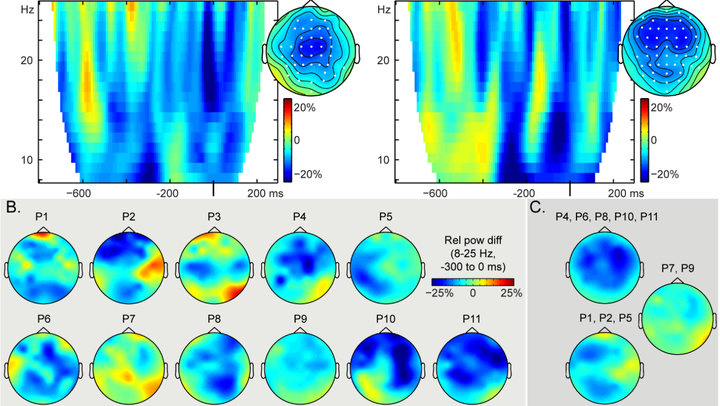 Different frequency bands in the electroencephalogram are postulated to support distinct language functions. Studies have suggested that alpha–beta power decreases may index word-retrieval processes. In context-driven word retrieval, participants hear lead-in sentences that either constrain the final word (‘He locked the door with the’) or not (‘She walked in here with the’). The last word is shown as a picture to be named. Previous studies have consistently found alpha–beta power decreases prior to picture onset for constrained relative to unconstrained sentences, localised to the left lateral-temporal and lateral-frontal lobes. However, the relative contribution of temporal versus frontal areas to alpha–beta power decreases is unknown. We recorded the electroencephalogram from patients with stroke lesions encompassing the left lateral-temporal and inferior-parietal regions or left-lateral frontal lobe and from matched controls. Individual participant analyses revealed a behavioural sentence context facilitation effect in all participants, except for in the two patients with extensive lesions to temporal and inferior parietal lobes. We replicated the alpha–beta power decreases prior to picture onset in all participants, except for in the two same patients with extensive posterior lesions. Thus, whereas posterior lesions eliminated the behavioural and oscillatory context effect, frontal lesions did not. Hierarchical clustering analyses of all patients’ lesion profiles, and behavioural and electrophysiological effects identified those two patients as having a unique combination of lesion distribution and context effects. These results indicate a critical role for the left lateral-temporal and inferior parietal lobes, but not frontal cortex, in generating the alpha–beta power decreases underlying context-driven word production.